Jon Kuno graduated from St. Cloud State University in 1972 with a degree in music education. While at St. Cloud he studied trumpet with Al Moore and conducting with Kenton Frohrip. Prior to finishing his degree, Jon worked part-time teaching band in Milaca, Minnesota.

After graduation he was hired full time in Milaca as the high school band director where he directed the concert band, jazz band, musicals and led the marching band. He later came to Osseo High School as one of the band directors and was in charge of the marching band and jazz programs. Jon taught in Osseo until his retirement.

As a trumpet player, Jon performed with central Minnesota dance bands including the “Nocturnes Big Band” plus some smaller “old time bands.” Jon was a charter member of the Lake Wobegon® Brass Band where he played the repiano cornet part. 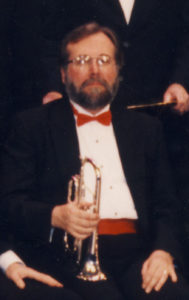