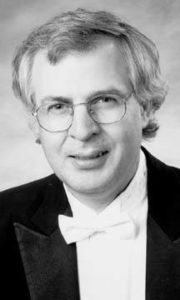 Michael Halstenson, a native of North Dakota, is the principal conductor of the Lake Wobegon® Brass Band.

A prolific composer, Halstenson’s works have been performed by many amateur and professional groups, including the St. Paul Chamber Orchestra, the Minnesota Orchestra, the University of Minnesota Opera Theater, St. Olaf Band and others.

In 1996 the Lake Wobegon Brass Band premiered Halstenson’s “The Hill Called VØerbjerg,” which was the band’s first major commission, and can be heard on their CD recording, “Bravura!”