In the 1950’s, after college, Dick did a stint with the Jimmy Dorsey Band, and continued playing with several popular big bands in the area including the Rod Aaberg Big Band, and appears on one of the albums that they recorded.  Dick took a band teaching job in Saint Francis, Minnesota around 1960, assuming it would be temporary situation, but ended up remaining there for his entire thirty-five year long career.

During that time he was deeply involved with various musical and educational organizations like MMEA and the Minnesota chapter of IAJE. Throughout his time as a band director, he was also directing a church choir and was always helping out with pit orchestras and whatever else the community might have needed. He also continued gigging with various dance bands.

Dick was a Charter member of Lake Wobegon® Brass Band.  He was a high school band director at St. Francis High School and a life long musician and music educator.  Dick’s son David said, “I know that he considered playing with the LWBB a big feather in his cap, and looked forward to seeing and playing with everybody at rehearsals and performances. He was really proud to be involved with Lake Wobegon® Brass Band. 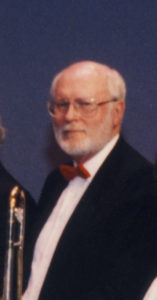 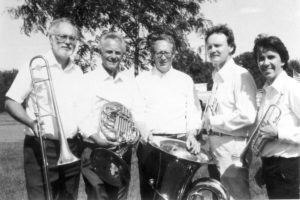