Musician, band director:  Bill graduated from Minneapolis Central High School in 1949, later graduated from the U of Minnesota Served in the Army and was stationed in Austria during the Korean War. Bill taught band and music at Forest Lake, Chisago City and Spring Lake Park, where he retired to perform with local bands, including three decades with the Barbary Coast Dixieland Jazz Band and many years as a Charter member of Lake Wobegon® Brass Band.

More recently, he played tuba with the Banjo Brass, and annually at a Cantata for Prince of Peace Church in Brooklyn Center. Musical highlights include the Nagasaki Goodwill Dixieland Tour in 1990 with the City of St. Paul; composing and playing a Fanfare in 1996 for the King and Queen of Sweden’s visit to Chisago County; playing pops songs with the Minnesota Orchestra, the Cantata, and jazz church services with Barbary Coast.

Besides many of their CD’s, he also recorded “Latin Over Easy’ with the Dan Savage Quintet and Bill played countless local ballrooms with the Harry Reiner Dance Band. Bill directed the Faith Lutheran Church choir in Forest Lake for 18 years.

Bill can be heard as the soloist in this 1993 LWBB concert recording of Georgia on My Mind (Hoagy Carmichael / arr. Alan Morrison) 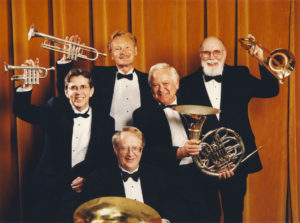